3 places where you can get FREE GAMES.

3 places where you can get FREE GAMES.

Want great games, but don’t want to pay? If you’re looking for the latest, you’re out of luck assuming you’re not a pirate.

But if you’re willing to play something a little older, you just might find something perfect for you.

At release, games can cost $50. Wait a few months and that price will go down. Wait long enough and, if you’re lucky, the game might become free altogether. Maybe this will be part of a giveaway, meant to promote a sequel or a service. Maybe this will be the developer wanting to give something back to the fans. Or maybe the game’s become free-to-play, hoping to monetize in-game purchases.
Whatever the reason, you don’t necessarily need to break out your credit card to play a great game. Here are some places to check.

EA Origin: On The House

EA’s answer to Steam, Origin, isn’t exactly beloved – many blame it for the botched release of SimCity. But there is at least one perk: free games. 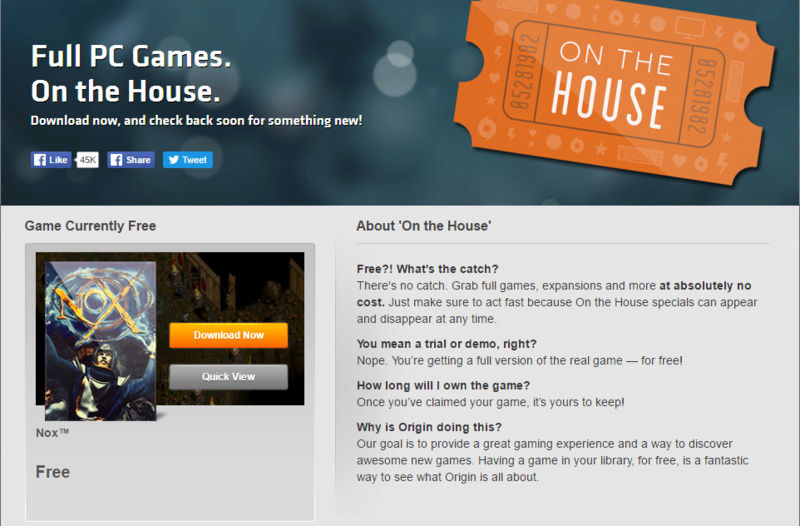 Head to Origin's "On The House" section and you can get a free game, RIGHT NOW.
Choice switch, and you’ll need an Origin account to download anything. The point is clearly, in part, to get you to sign up for Origin, but free is hard to complain about.

Free to play gameplay isn’t exactly the same as freeware. There’s usually something you’ll be encouraged to pay for in-game. Still, the free to play section on Steam is well worth a look if you want a free, premium game to play. 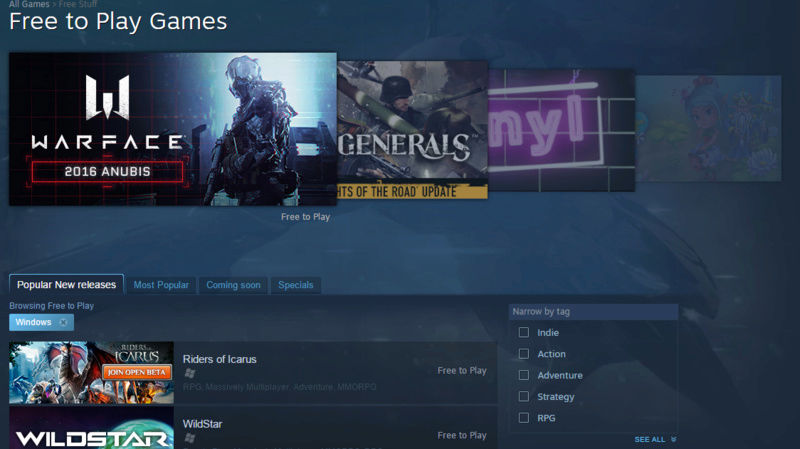 Games like Dota 2 and Team Fortress 2 are a great place to start, but they’re far from all you’ll find: there are nearly 100 titles here, covering everything from strategy to shooter to MMO. You’ll find something you like, so take some time to explore.

If it exists, Reddit can make a community devoted to it – and free games are no exception. If you want to find out when a commercial game becomes free, and generally keep up with free games, you should subscribe to r/freegames on Reddit. 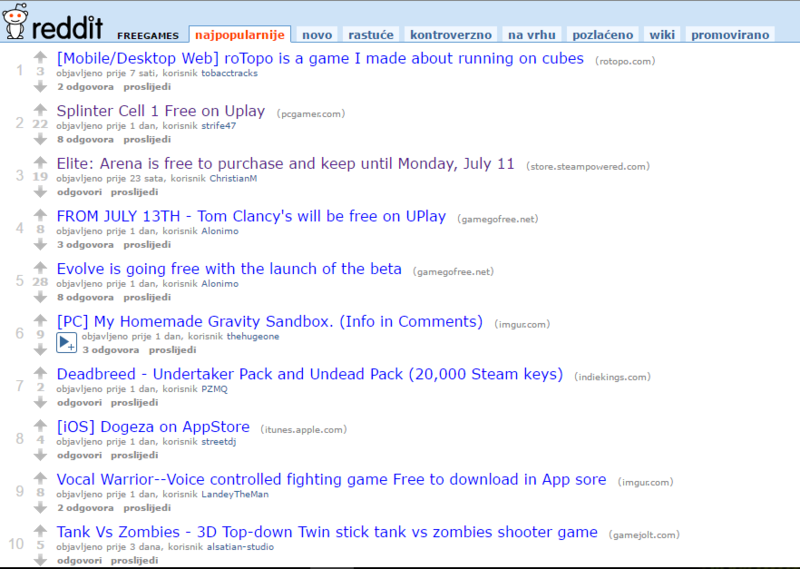 It’s also worth checking out r/efreebies, which includes a wide variety of free virtual goods. Not everything there is video-game related, but it’s a larger and more active community. Subscribe to both and you won’t miss any major gaming giveaways.

Want more? Here are a few other places worth checking for free, downloadable games.

There are a few free games on GOG.com. They also occasionally do high profile giveaways – I got Fallout 2 and Torchlight this way.

FreeAndLegalPCGames is a blog compiling tons of free games, and is well worth exploring. It’s from Megazell, who for a long time maintained a huge thread of free games over on the CheapAssGamer forum.

There’s a list of free indie games over at The Independent Gaming Source; classics like Cave Story and Spelunky await.

Do you know of any other places to find free games, legally? Comment below.

Witcher 3: Wild Hunt DLC will be free on GOG.com. Bundle by bundle. Catch first bundle including the Temerian Armor Set (horse armor included) and a Beard and Hairstyle Set for Geralt, the game’s protagonist.

YELL INCOHERENT LANGUAGE AT THE SKY

Thanks for sharing!
Be "careful" with those free-to-play games on Steam though. Some offer aggressive forms of micro-transactions, like theHunter here: http://store.steampowered.com/app/253710/

Adwomin wrote:Thanks for sharing!
Be "careful" with those free-to-play games on Steam though. Some offer aggressive forms of micro-transactions, like theHunter here: http://store.steampowered.com/app/253710/

I wanted to play that one, because it looked very interesting. But just look at the reviews and you'll understand what I mean.

Steam reviews have often to be taken with a grain of salt. Alot of plain bashing and with some reviews you even wonder why Valve alllows it, as it only contains one sentence (for example; "bad" or "stupid game"). And most of those negative reviews are from players then who only have played it for like 10 or 20 minutes (0.1H, 0.2H). Can't be taken serious.
Oh and once something got microtransactions, then it's already bombed as pay 2 win by some. That seems to be a new rage to do that. They also do that now with Black Desert. It can get annoying after a while.
As for steam and free to play; i have to say that steam often doesn't work well with MMO's or online games and you better just get the client from the developer or the publisher's website instead. Like Path of Exile for example. Better get that one from Grinding Gear Games their website instead.

@candesco wrote:Steam reviews have often to be taken with a grain of salt. Alot of plain bashing and with some reviews you even wonder why Valve alllows it,

They allow those posts because of the lack of (realistic) alternatives:

- consistently blocking unpleasant posts will take effort, and Valve gains nothing from it. The only thing that will happen is a huge outcry on the likes of Facebook/Twitter/Reddit. "Valve-does-not-allow-freedom-of-speech" and so forth. And "freedom of speech" means the world to the average internet user of today. The effort it takes to block messages in a consistent way would be in no proportion whatsoever with the overall expected aim or strategy.

- putting a minimum count of words as a requirement for submitting reviews is also dubious in my opinion, since not everybody may have time (or even formal education) to write an elegant and well-argued post. It wouldn't be fair to block brief messages, be it positive or negative ones.

Couldn't have said it better myself!
I don't care much for game- or any kind of reviews in general. I will read them, but they won't influence my decision to buy something, or not. I take that stance in every facet of life by the way.
Besides, I always try (download) before I buy, though in some cases I already know it's going to be worth it.


Why? Because "likes and dislikes" are personal. I've heard a lot of people say that the Elder Scrolls franchise is not their cup of tea, but those are actually my favorite games. Can you believe there are people that don't like to play videogames at all??? They always look at me funny though, when I say I never watch TV, go figure

@candesco wrote:And most of those negative reviews are from players then who only have played it for like 10 or 20 minutes (0.1H, 0.2H).

By the way, how about some little math? Since an hour consists of 60 minutes, 0.1h are 6 minutes and 0.2h are 12 minutes actually. Of course that doesn't change anything about the argument (for that, see my previous reply). But you're still welcome.

I just found this site 2 days ago, havent tried to take advantage of it yet, honestly hvaent done much of anything with it yet, i was kinda doing something else when i found it and only bookmarked it for later. but it's worth a look anyways so i'll pass on the link. i'm currently on a netflix binge of prisonbreak so it's gonna be awhile probably til i get back into gamer mode.

here is the site... let me know how it is.  https://www.freesteamkeys.me/

I tried one of those, got redirected through a site just like AdFly, to an ad

ok... i wouldnt completely right off that site just yet though, the day i found it i did try to get horror hospital. the site it took me to was who'sgamingnow and i had to sign in to it using steam. but when i did and went to the page it said they ran out of keys, which i kinda expected anyway, cause a great many hours had already passed before i tried it.

i think it's the gleam site that does the survey type stuff for giveaways. i think i tried that site before from reddit. i've seen gleam giveaways on many sites before, so i'm guessing they must be a legit "pain in the ass" that i would never waste my time on. i also wouldnt suggest gleam to anyone else, but i do get the feeling they must be legit. cause they do get listed everywhere on all the free steam key places i ever been to. lol. but not all giveaways on the site i posted about are from gleam.

one site listed on that site as one of the giveaway sources of steam keys is indiegala which i know for a fact from experience that they do occasionally give them away.

i'll check the site out more personally, when i get back into my game phase again. i bounce between working on music, playing games and watching netflix which lately i been going thru my netflix stage. lol.