Note: some readers may find certain images graphic or disturbing; be advised.

As part of my drive to get back again to some older games that I wanted to complete, but haven't really found the time for doing so, I came across again The Godfather 2. The games "The Godfather 1 & 2" are based on the movie trilogy of the same name, which in turn were inspired by American writer Mario Puzo's 1969 novel.

Now, adaptations of fictional works or other works of entertainment "into" other genres are often viewed skeptically. Without spoiling too much, my impression was more nuanced though. The following will focus mostly on "The Godfather 2", but I'll make references to the first part too. 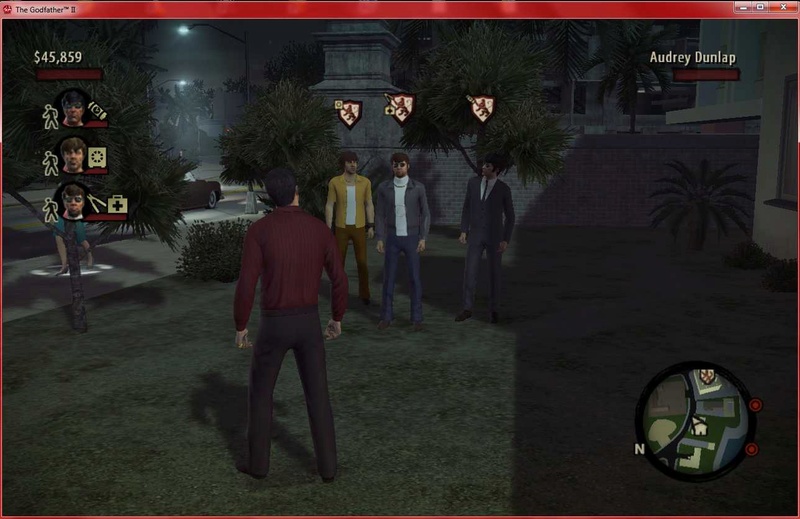 The Godfather 2 is a third-person/open world shooter in which you play the character of Dominic, who according to the in-game story is part of the New York City-based "Corleone" Mafia family. The in-game story takes place in the America of the 1950s, and the general aim is to engage in various activities to propel your Mafia family to the most powerful one in America. Apart from the main storyline missions, other objectives include taking over businesses, fighting other Mafia families, doing "favors" for various private citizens and even corrupt officials - who in turn can all give you either more money or other bonuses.

Along your journey you can upgrade your own character, use favors that help you (like getting rid of police attention) and recruit followers, who fight along your side. 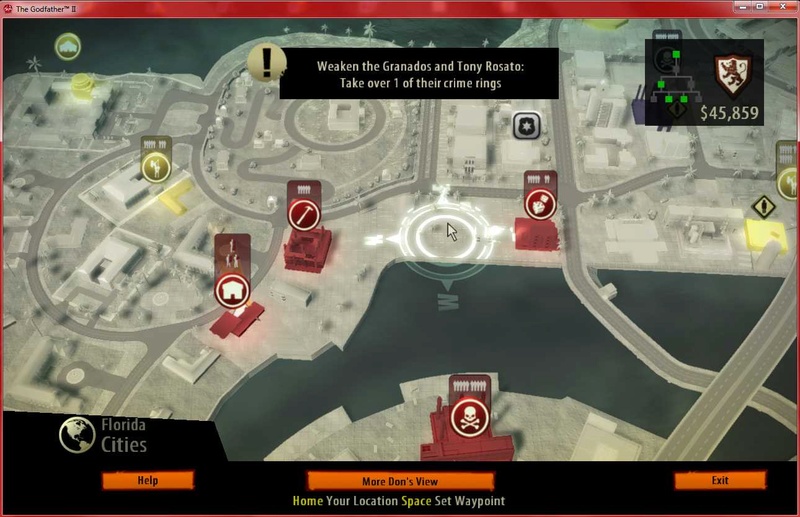 The in-game story spans out in various locations like New York, Florida and Cuba. In each of these regions you have to complete certain main storyline objectives, like assassinating or threatening certain targets. In addition there are various business locations which you can/have to take over for the game to progress. After a certain amount of takeovers and other objectives you can fight other Mafia families, on their own compound.

Now after playing through the game, my biggest disappointment was the lack of variety in the gameplay. It seems for the most part, that "The Godfather 2" is really just about running around and killing people. Either rivaling Mafia families, important key witnesses, or other people. The final fights against the rivaling Mafia families are also identical in terms of structure: drive up or go to the compound, and kill everybody in there - including the boss. Finally, blow up the mansion.

Even the side-missions (favors that you do for private citizens) tend to be the same: either kill somebody, steal something or "teach an unwanted person a lesson" - i.e. injure the target, but don't kill him/her.

A little bit of compensation is provided by the party system, in which you can recruit/group followers who fight with you. Each follower can have various weapon skill levels and other specializations like medic, arsonist, demolitions expert or engineer. Ideally, you will want to have all these areas of specialization covered when you have your team around. A funny (?) side-fact: you can also fire/dismiss team members, but at first you have to mark an option in the appropriate menu, and then you have to kill that team member to make place for a new team member. I have not read the novel yet, but I suspect - as crazy as that might sound - that there was/is some real-life truth to this practice. Meaning, the "only" way out of your Mafia family was through death. Without that, I find it difficult to imagine another explanation as to why the game is making such a fuss about dismissing someone.

Another nice aspect: by default, every team member can only learn one of the specialization skills, but if you "promote" them to a higher rank within your own Mafia family, they can learn more than one skill. There are ranks such as "Capo" or "Underboss". 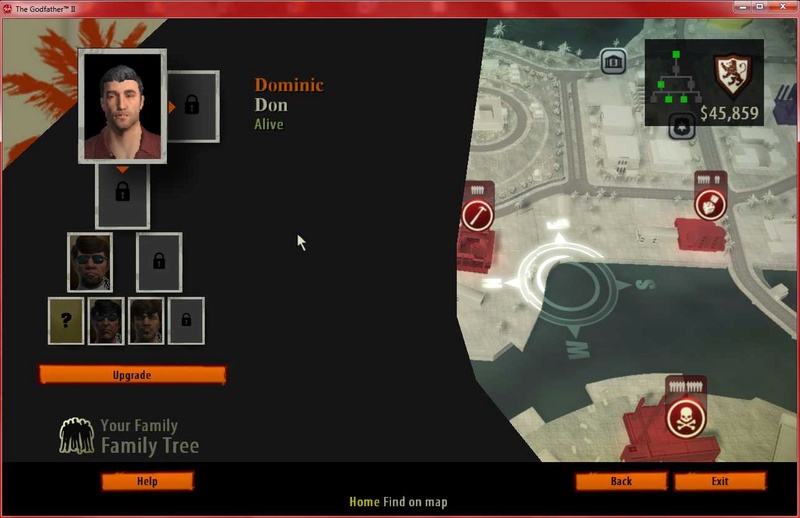 To the fighting now: 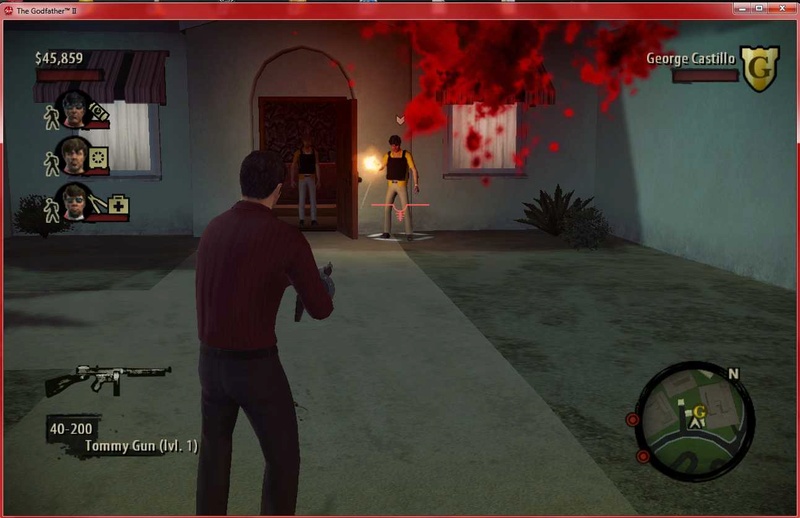 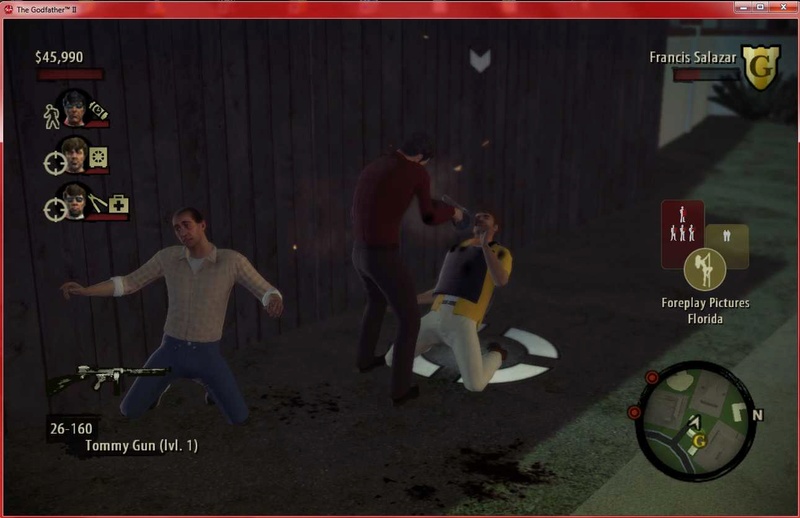 One thing to notice right away, is that in the Godfather II, you could easily recover from injuries by e.g. taking cover behind an obstacle for a little while. Your health would regenerate. Unlike in The Godfather I, where your health was limited, and you could die very quickly.

Combat scenes can be ugly and bloody, although I'm not sure if there are "cut" versions of the game out there, which might have some of the violence curtailed.

Another point of criticism I would have is that the controls feel very...strange, for a lack of a better word. Control input feels kind of "delayed", which is especially felt when steering vehicles. 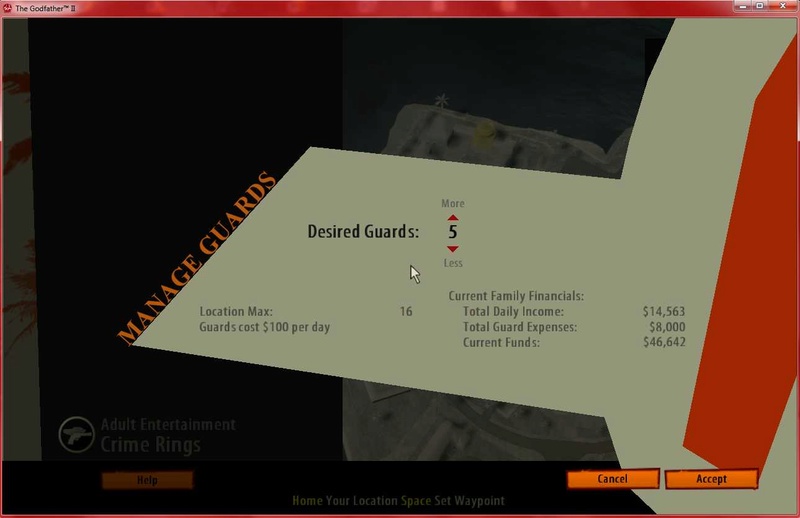 A very positive (albeit limited in scope) feature is the little economy system that comes along the game. For the businesses that you take over, you have to manage guards, who are essentially NPC characters guarding the place against other Mafia families. But you also have to keep in mind that sometimes, other Mafia families overpower your guards, which means you either have to jump in yourself, or you can even send your buddies there to defend it.

In some cases, other Mafia families might "just" bomb or burn down your businesses, in which case the business is on hold for some time, unless you redeem a favor for a quick rebuild or something along those lines.

This aspect of the game - at least in theory - provides you with the option to allocate resources to your liking. In some cases it may be smarter to bomb rival Mafia businesses at first, instead of killing everybody immediately and "formally" taking over. In other cases you have to watch out and put a lot of thought into guarding particular businesses that give you bonuses like ballistic vests or armored cars. If you lose one of these businesses, your bonus vanishes too, until you re-capture the business.

In general, you also have to pay attention to how many guards you use. Bigger and more important businesses will need more guards, but then, if your overall "income" is smaller than the overall cost of guards, then in most cases you're doing something wrong... 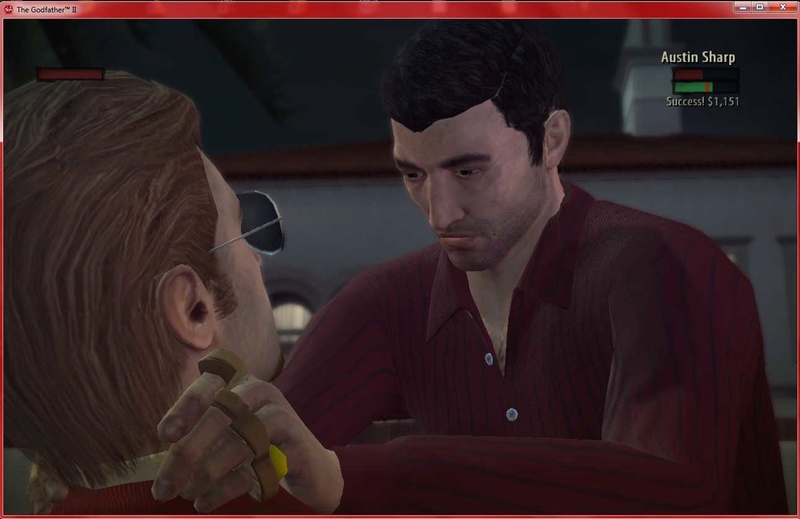 Another difference to the first Godfather game is that here, there is lots of violence. Up to some extent, that one could suspect the developers were trying to compensate for the gameplay-related weaknesses, with excessive violence. This can include: bludgeoning, strangling, bombing to death, direct head-shot executions and throwing characters from high-rise buildings. On the one hand, it does feel a bit over the top, but then: it's a Mafia game, so violence is mostly included I guess. Though in practice, there may have been "peace treaties" between Mafia families, but I can't tell for sure.

Once you "overbuff" your character with physical strength-upgrades, it doesn't take much to kill people with bare hands, which I find slightly ridiculous, and it can be annoying on missions where you need to injure somebody, and not kill the target.

Overall, I find the game not so bad. The inherent problems are not really grounded on the fact that it is based on other fictional works; the weaknesses are mostly due to repetitiveness in gameplay. It's certainly worth playing through once, but then it's also something that most people will forget soon thereafter. In my opinion, EA should have made just one (1) big "The Godfather" title, and possibly spent more resources on it, instead of releasing 2 half-decent titles.
_________________