Hi. While I'm waiting for City living to be craacked, I decided to give Sims Medieval a try.

I downloaded the base game from this site and installed according to the instuctions that you get with the download. Everything worked fine, then I got a notification for an update. In the instructions it said that you can update the game if you wish. So I did that and it broke the game. The update resulted all the buildings being invisible(just the icon of each place is floating in air), if I go to build mode I can't select anything and it doesn't let me exit. Also I couldn't select and play the hero character I made.
Since I was quite annoyed I uninstalled the game and then did everything step by step from this guide:
http://games4theworld.forumotion.com/t18497-must-read-how-to-install-the-sims-medieval-correctly

I also downloaded the pirates expansion.
And after everything I did, the game crashes while it's loading and it just says : Sims Medieval stopped working. The only difference I made was that I extracted all files in my D drive, instead of the C drive. Does that make a difference with the patched version?

Does anyone have an idea what to do? Or should I just unistall everything and install the base game and make sure I don't update it?
I did safe my progress and copied the files to another folder, cause I don't feel like starting all over again with that tutorial.

As far as I can remember, the correct procedure is:
1. Download and install Medieval AND Pirates
Do not update
Extract the crack and place the 3 files in Program Files(x86) - Electronic Arts - The Sims Medieval - Game - Bin  (Overwrite because they already exist)
Now update the game
Place the 3 files from the crack again in the correct folder. 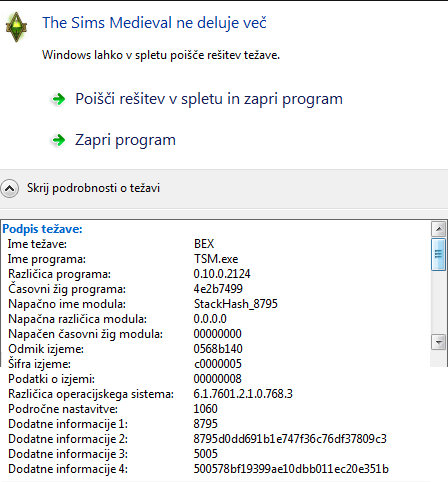 But if I use the shortcut from the desktop the game loads, shows my save, but demands that I insert the disc. Well. I can uninstall it (again) and do it by the steps Tarac gave. I thankfully saved and backed up my progress.

@Cat_Eye wrote:The only difference I made was that I extracted all files in my D drive, instead of the C drive.

What do you mean by extract to the the D: drive? Do you mean the game is actually installed there?

If so, I never tried it myself, but I guess The Sims Medieval works similarly as The Sims 3, and if you want to install to a different drive/partition, you have to create the install folders beforehand (and of course actually select them during the installation):
http://games4theworld.forumotion.com/t19680-a-note-on-installing-the-sims-3-on-external-drives

But for now, you may also just try re-applying the Medieval manual-patch and the Medieval fix again (see the guide you linked in your opening post). If that doesn't work, then there may be another issue...
_________________

So I reinstalled the game and did the steps that Tarac listed and it resulted in the game completely stopping to work, sinc it went to the error message as soon as I tried to play it. However I did then try the ultimate fix again(which previously didn't work) and now it WORKS. Thanks guys!

I also didn't lose any progress!

Another question, has anyone tried out this mod with the cracked game?
http://www.modthesims.info/showthread.php?t=449550
_________________
You can download my sims here. Feel free to use them however you want.

Let's close this topic, your mod question is more fitting in the chit-chat section

Good to hear your game is now working.
Happy simming