Disclaimer: if you download Gallery items from a The Sims 4 base game on Origin, that is on a "higher patch level" (typically the case shortly after the official release of an update or DLC, but before a crack has been released for the DRM-free versions), then you cannot use them in a cracked game that is on a "lower patch level". If you find yourself in that position, I would advise to leave everything as-is. And not do the folder-renaming tricks, illustrated below. Wait until a reliable crack has been released, and then go ahead with the procedure down below.

Since a lot of people have purchased both an Origin-version of The Sims 4, and also want to play with RELOADED/G4TW-versions of the game, the following post might come in handy. Yes, you can have both a legit game and a cracked game installed on the same computer/drive-partition, and play with both of them.

But since both games use the same location for their savefiles, mods, CC and whatnot (Documents\Electronic Arts\The Sims 4), you will need to make certain arrangements so that the Origin-version and the cracked version don't conflict with each other.

The method I use is "folder renaming". For this example here, let's assume you are happily playing the Origin-game of TS4. Navigate to the location C:\Users\(your username)\My Documents\Electronic Arts\The Sims 4.


1) Look at the following screenshot, and MEMORIZE the folder marked there. Memorize it in such a way that it belongs to the Origin-game. 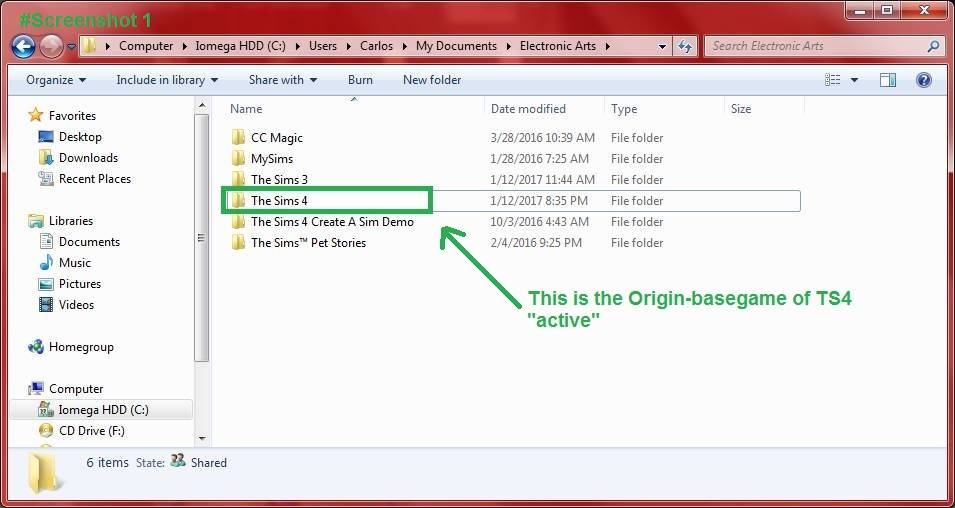 2) To help yourself a little more, you can go inside the folder, and put a kind of "marker" inside. In my example, a .txt file named as "Origin game". 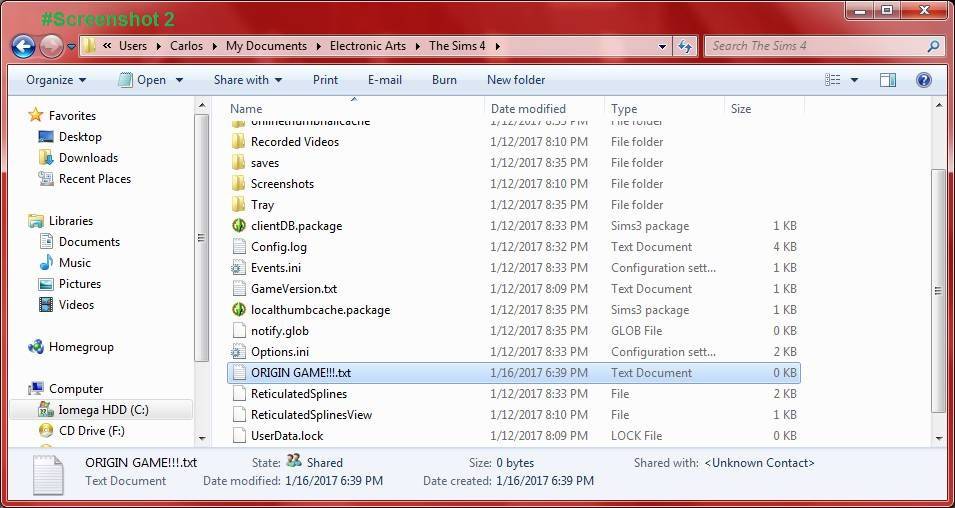 3) Another way to help yourself a bit is to look at the file GameVersion.txt. The folder "The Sims 4", which has a higher number in the GameVersion.txt, is mostly going to belong to the Origin-game. 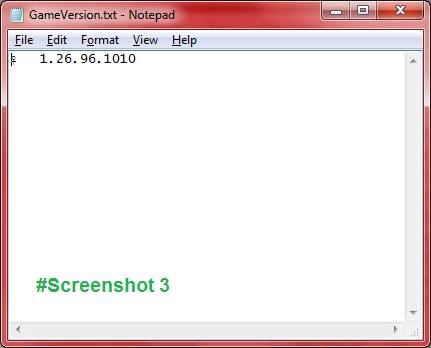 4) Now, you are/were playing the Origin game. And you now want the RELOADED/G4TW versions. You must make the folder "The Sims 4"  that belongs to the Origin-game, inactive. That is usually achieved by renaming the folder, but you could as well MOVE the folder out of that location. I myself renamed it, see the following screenshot. 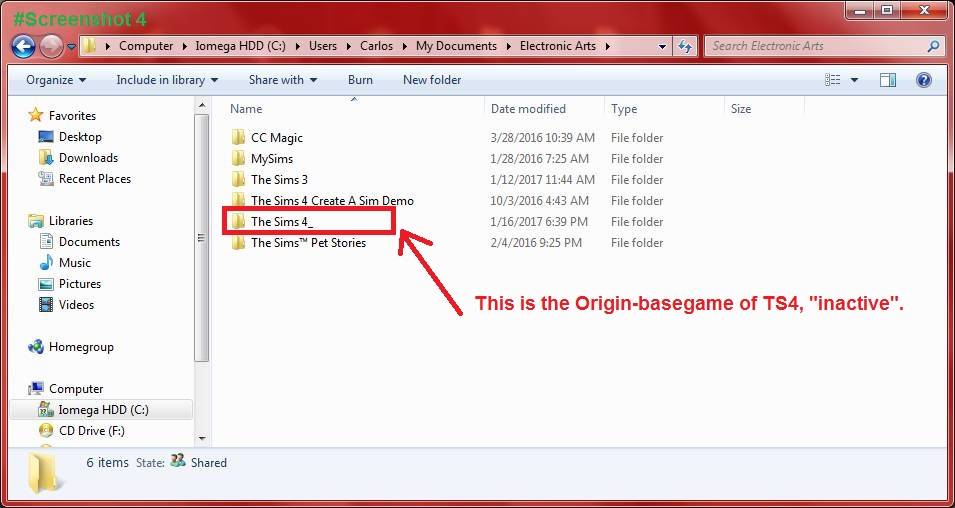 5) To make things easier for you, you could choose a folder name that clearly marks the Origin-game as such. Look at the following screenshot, I have renamed the Origin-folder once more (for illustration purposes), into The Sims 4_ORIGIN.

When you now install the cracked game, and start it up there will be no issues, if you did everything correctly. In that location, there will be a new folder named "The Sims 4", this one now belongs to the RELOADED/G4TW game. If you like, you can again "mark" that folder, by putting a .txt file inside, stating which game the folder belongs to. 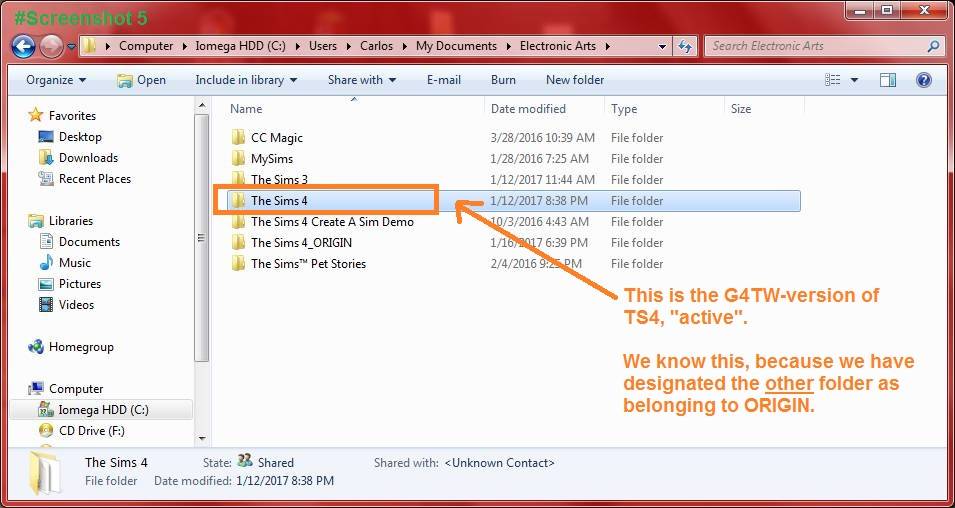 6) Should you want to play again the Origin-version of TS4, you have to make the folder belonging to the RELOADED/G4TW "inactive" again, by renaming it. I chose "The Sims 4_G4TW".

The folder named "The Sims 4_Origin" needs to be renamed back to "The Sims 4", to become activated again. Then we can play the Origin-game again. 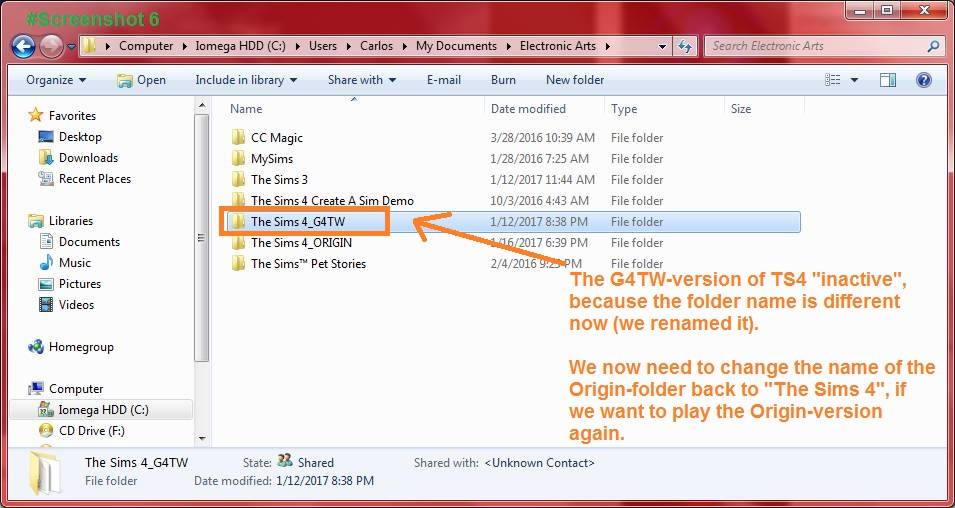 7) Some users have thought that "forgetting" to rename folders is a huge problem with this method. If you feel you have forgotten to activate/deactivate the appropriate folder, I suggest you exit the game without saving. Then you go under C:\Users\(your username)\My Documents\Electronic Arts\The Sims 4 and go inside the folder "The Sims 4". Delete the file GameVersion.txt then.

Now you proceed with renaming the folders. What is your active folder, and what is the other folder in your location? See screenshot #5 above. If you really forget to rename folders, you can look at the folder you renamed LAST, and from there determine which game the active folder belongs to. Screenshot #5 shows a folder named The Sims 4_ORIGIN and the folder The Sims 4. The first one belongs to the Origin-game of TS4, and the second one to the "other game", which will be the cracked one.

So because the No-Origin-fixes are coming very quickly these days, here's a small - and overdue - update. Meanwhile you don't actually have to rename any folders. Or rather, it is a lot easier to just roll with one single "Documents"-folder for The Sims 4. The gist of the information can be found here:
https://www.games4theworld.club/t35996-sims-4-original-and-cracked#209782

Basically you will want to avoid pre-maturely updating your Origin game, and wait with doing so until an updated No-Origin-fix has been released. Turn off automatic game updates in Origin if needed, or better yet: don't actually log into Origin until the new TS4 crack is out. So again: update your cracked game first, and THEN update your Origin game.

If you really made a mistake and "accidentally updated" the Origin game before a new crack has been released, then just roll with it. But then you'd have to delete the "GameVersion.txt" under Documents => Electronic Arts => The Sims 4, should you want to switch back to the cracked one. Note: you only have to keep deleting the GameVersion.txt as long as the crack has not "caught up" to the Origin version. When a new crack is out (a.k.a. both Origin and cracked games are on the same level), you don't have to delete the file anymore, or for that matter rename any folders.

I would also recommend that you wait with updating your mods/CC, until BOTH Origin and cracked game versions are on the same patch level again.

Important Disclaimer: this method assumes you are using the Origin-version of The Sims 4 'merely' for grabbing Gallery-items! Because if for some reason you wanted to have separate savefiles and sets of mods/CC for each version (Origin + cracked) of the game, the "update" I just gave does not apply to you!