Cat_Eye wrote:The reason why people think Skidrow cracks th game is because the sites who release the reloaded repacks have skidrow in their name.
Also for some reason the sims 4 repacks are almost never mentioned on these predb sites. So they aren't that reliable for this. When a repack gets released it will be all voer the torrent sites.

Which was my reason for mentioning the predb sites. to show that skidrow doesn't crack the sims 4. lol
repacks are just that, repacks. skidrow isn't a repack group, they are a cracking group.... yes, but the skidrow websites aren't skidrow. I just hate to see these websites that use the names of the scene groups, get credit for these releases as if they were the ones that did the work.

here is some info to help educate people a bit about warez and who actually does the work in cracking stuff. so you dont help spread misinformation.

there is plenty more information out there for those that are interested, here is just a good place to start.

Sorry for the sorta Off topicness, though due to some of the posts i felt it was relevant.

ok... now back to our regularly scheduled topic. "The Sims 4: Vampires" lol

The cracks for the Sims 4 are produced by Reloaded as you can see in your downloaded games in Game - Bin
RldOrigin.dll.

i've been into warez longer than many of these people been alive lmao. way back... when we used a phone line, a modem and a BBS. (Buletin board system). internet? wtf is that? people complain about download speeds these days, makes me laugh. their lucky they never had a max download speed of 56kbps or less. lol

I remember those days where AOL use to give me half my 56k speeds aka it acted like I was on a 28.8k modem for some strange reason. Downloading Linux ISOS took forever and so I ended up using DamnSmallLinux because of its 50mb size. Also had Ubuntu send me a bunch of free discs as well. Also use to do a lot of Telnet back then as well since it was about the only thing that would run on my connection interms of online games.

I remember downloading my first items on a 28k connection. And on a phoneline :s (we didn't have cable internet available in my area until later)


Ahh those were the days! When you would be happy to watch a "screener" of a new movie, because it would be months before it would even be in theaters on my end.


These days I won't download anything under full HD quality

I think we need a new topic... i'm starting to fear of responding about the way back when due to this being a sims 4 vampires thread and not wanting to ruin it lmao. that being said... yeah, way way back, back in the days of the i386 pc with 4 mb of ram, 200 MB Hard drive, i cant even remember the processor back then lol. 9600 baud modem with windows 3.1 and MSDOS lmao. i'm 46 y/o, back to the stoneage back when 640x480 resolution was as HD as it got lol. i tried running windows 3.1 recently on a virtual Pc, lmao it was pretty funny.

Honestly i miss the pre-internet days... I used to love going on BBS's, and it was great for meeting local people that were more like me. i bet even back then most people didnt even know what a BBS was.

I was chatting with @The_gh0stm4n about early computer experiences just a few days ago. My father has been in IT for as long as I can remember, there are pictures of me at his office when I was only a few years old, must've been mid-80's. He was a programmer back then, and worked himself up to "head of IT- department" in the years to come. He's still in IT right now, being eligible to retire in a year or 2.


My first memories of using a computer go way back before Windows was even a thing, I played games on an "Acorn Electron", and it was exactly the kind of setup as you see here: 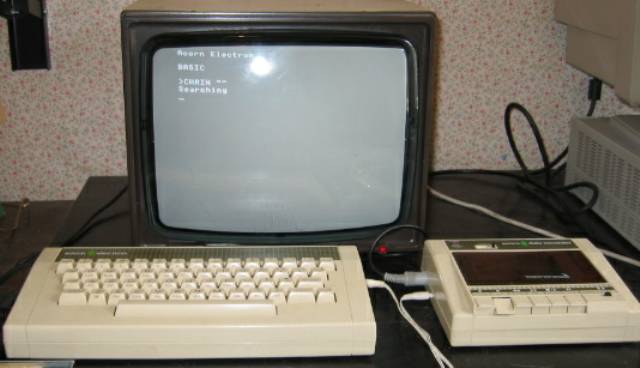 My first Windows memory is of Windows 3.11, my father had just brought home a computer with the latest of the latest, which was Windows 3.11. He then started "Paint" for me to try. I still remember like it was yesterday, how difficult I thought it was to handle the mouse

I was sure I would never get used to that.


Pirating runs in the family, over the following few years I played a lot of games that I'm sure my father didn't buy. Given the fact that the cd's all had handwriting on them, and even the tapes I used in the Acorn Electron were copies, now that I think of it.


"The Internet" didn't really appeal to me at first, although we did have dial-up fairly soon after the www started to be a thing. When my parents moved to another country in '99, MSN messenger was the cheapest way to stay in touch and I -reluctantly- installed it. I was hooked within a week, and discovered "Napster" not too long after that.

lol... a tape drive wow... that brings me back to our old commodore vic 20, i forgot all about that dinosaur lmao. i remember having a text game, i think it was called zork or something like that lol. damn and i thought having had an atari 2600 made me feel old

I was never much into console systems myself, although I played Nintendo 64 with my youngest sister during the late 90's/early 2000's. I got an Xbox 360 a couple of years ago, but I was always a PC-gamer.
I guess that was also because we had only 1 tv in the house, so if I had hooked up a system to the TV, everyone else would find themselves without a means of entertainment.


By the time my sister got that Nintendo, she also got herself a tv

i bounced back and forth alot over the years. especially with the arrival of game stores. being able to buy used games cheap really won me over lol. i had a huge ps2 collection, well actually ps3 collection too. but then i went thru a period where i couldnt afford to buy games and got stupid and started trading them in. now i have a ps3 and like 3 games. well, aside from games i bought from the playstation store, unfortunately my hard drive isnt big enough to download much. i had a nice big 500gb hard drive i put in it, but it burned out on me. so now my ps3 doesnt get used much. lol

I started in the early 80's with a Sinclair Spectrum z81 with 64 kb of RAM, costs 99 Pounds Sterling.
Storage was on a cassetterecorder.
Inspite of the low amount of RAM you could still write pretty large programs in some kind of Basic.
My favourite game was Ant attack.
Because I could write business programs on the Spectrum but was restricted to their mini-printer (kind of cash-register roll), I switched over to the Apple EIIe with 2 floppy-disc controllers.
Around 1985 I bought a Future system (1 main computer + 2 dumb-terminals), O/S was CCPM with Locomotive's Mallard basic. (later on Cobol).
Iiving and working in the United Kingdom (Sheerness) I was the first to present customs-entries to HMC&E via a telephoneline, based on my own software, all within the limit of 256 KB RAM and a HDD of 16 MB.

Yes, those were the days !!

I remember that I got a 100GB HD at some point and I was jumping with joy because that was A LOT in those days.

i remember getting super excited over a 1 GB hard drive. lol

but best ever was the TB. when i got that drive i thought i'd never fill that up lmao. boy was i proved wrong.

Ɛɗιη wrote:I remember that I got a 100GB HD at some point and I was jumping with joy because that was A LOT in those days.


First games that I played on Windows were "Transport Tycoon" and the original Warcraft.

Ɛɗιη wrote:I remember that I got a 100GB HD at some point and I was jumping with joy because that was A LOT in those days.


First games that I played on Windows were "Transport Tycoon" and the original Warcraft.