Note and disclaimer:
Due to the way the game works technically, it is very strongly recommended that you firstly install ALL available DLC of The Sims 4, and THEN make a selection to cut out the DLC that you do not like. Unfortunately, there is no easier way in cracked games - to our knowledge - to disable individual DLC items.

This post will show how you can de-activate individual DLC packs from your RELOADED/Games4theworld-based The Sims 4 games. While most people want the entire DLC pack, we frequently get questions about removing individual packs from the installation. Sometimes people have older or weaker computers which may be getting difficulties with the entire game, sometimes people are simply not interested in the DLC.

What many people have difficulties with, is the fact that unlike older Sims-franchise games, the "progressive buildup" mentioned here is actually needed. The DLC packs are not separable entities like back in The Sims 2 or The Sims 3. Here, the torrents don't just contain the actual DLC, but also updates to the basegame that are needed for running the DLC. At present you unfortunately have to install everything in order, before you can eventually make a selection of which individual DLC you actually want to play with.

You will have to follow the guide here, for starters:
http://games4theworld.forumotion.com/t21806-must-read-how-to-install-the-sims-4-correctly

When you did this, you can go from there. You have two ways to proceed now.


If you just want faster PC/game performance while playing The Sims 4, you can go to where the game is installed. 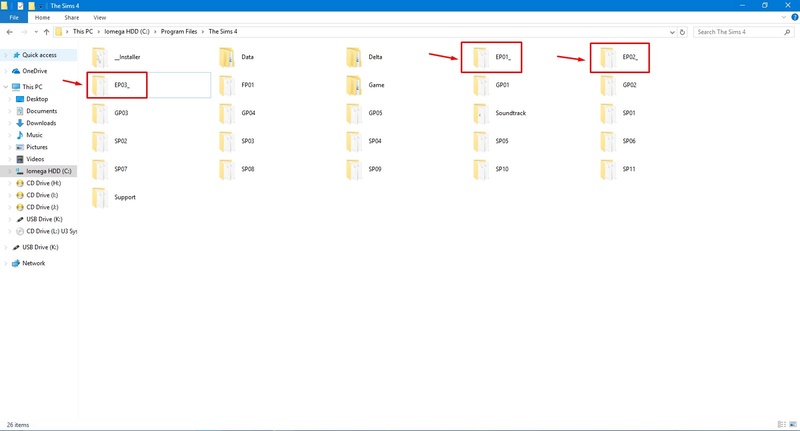 You will see 3 folders highlighted. These are EP01 (Get to Work), EP02 (Get together) and EP03 (City Living). All of them have been renamed, into EP01_, EP02_ and EP03_. This is so that the game does not recognize them. When you start up the game the next time, you should notice some performance improvements (depending on the number of the DLC you "disabled" that way).

The potential problems with this method:

when you play a "full" game with all DLC and then sometime later decide to remove certain DLC, your old savefiles may not be playable anymore, because they contained (important) data from the DLC, that you just removed.

the game may freeze either at startup or at some other point in-game. In which case you could try waiting for a minute or two to see if the game unfreezes. If not, you will have to forcibly-close the game through e.g. task manager. Even if the game eventually unfreezes, it will be a nuisance that you will have to decide whether you want to put up with it.

see also this comment here, which is similar to point #1, and may pose additional difficulties.

Which is why I would recommend the following method instead, but it is a bit more difficult.

You can go to the "Game" -> "Bin" subdirectory, of where you have your The Sims 4 installed. Open the codex.cfg file with the Notepad. Now scroll down a little bit. Where it says "Content", it starts listing the DLC. 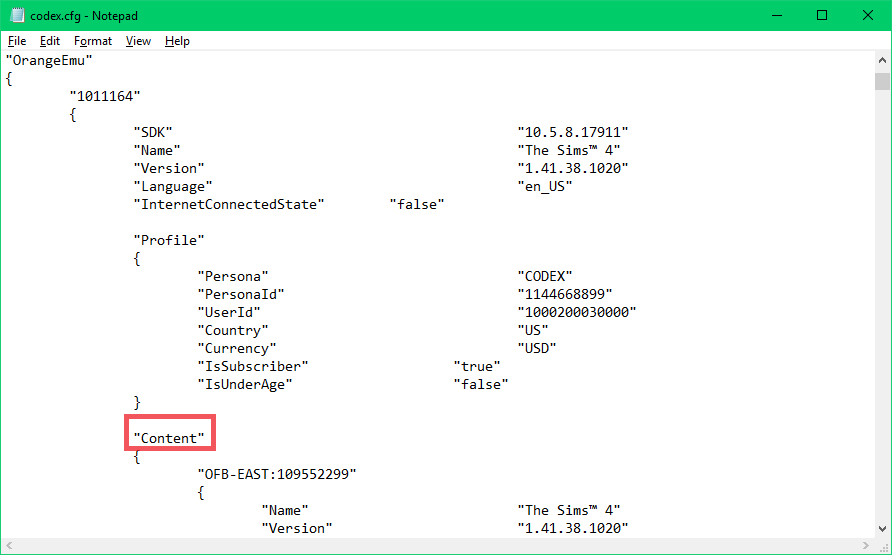 In the next screenshot here, you can see the portion about the "Cats & Dogs" DLC marked. Delete the entire portion of the entry, in order to remove Cats & Dogs (and any other component/DLC that you want to remove). 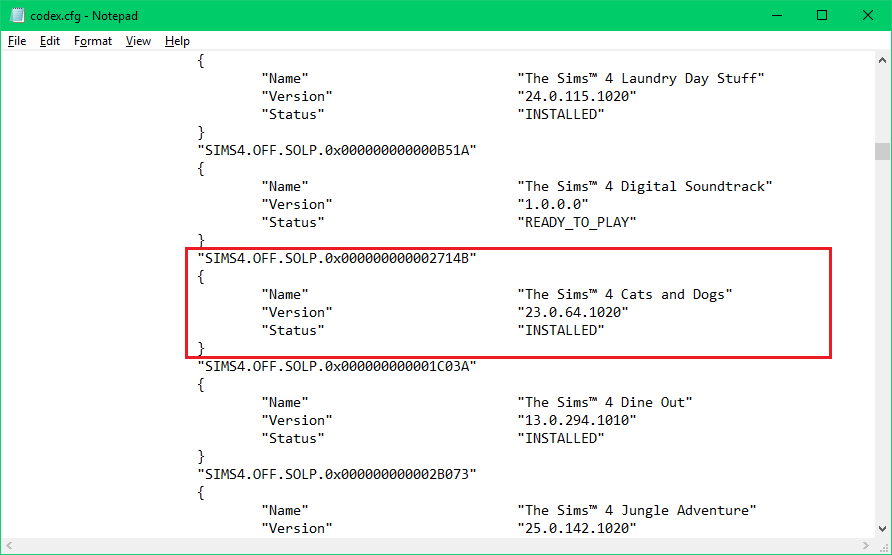 Now scroll down even more, until you see "Entitlements". This is another listing of DLC. 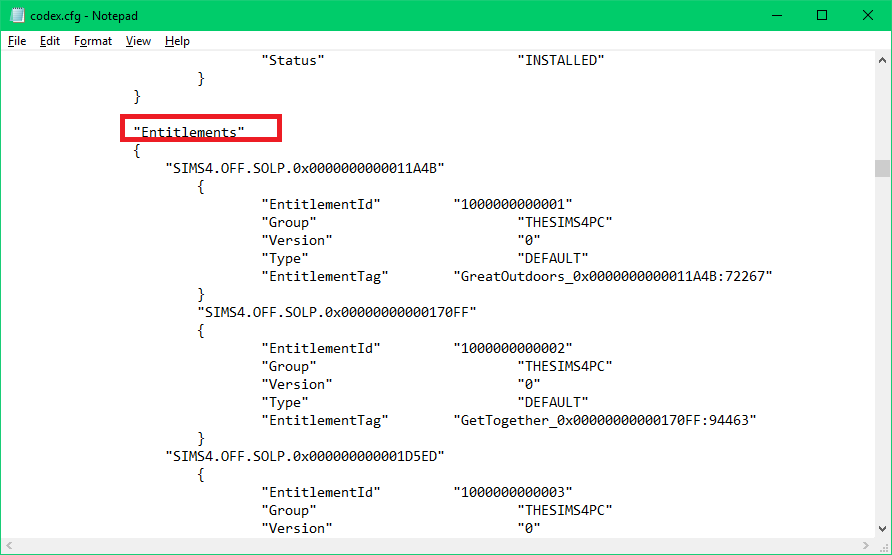 Look again for the portion of code that deals with the DLC you want to have removed. In my example again, we want to hypothetically remove the Cats & Dogs DLC. The code looks very similar as above. 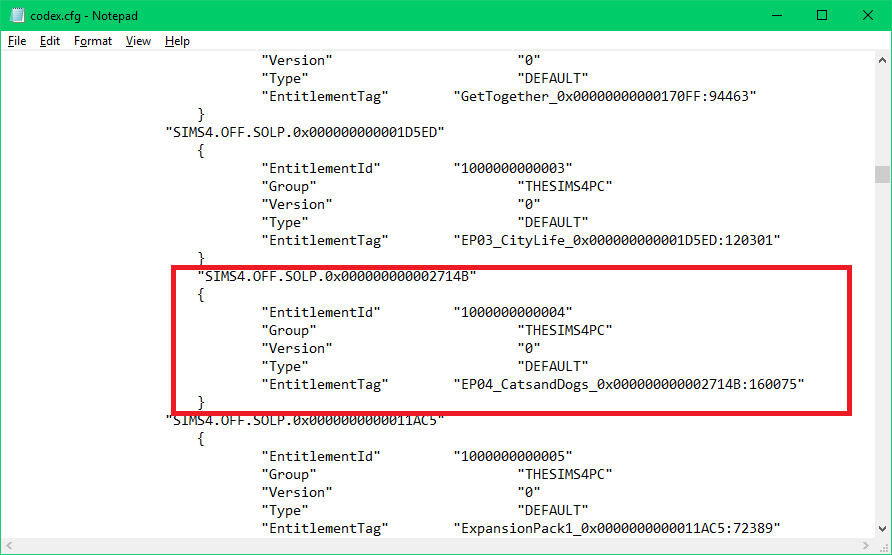 I guess "disabling" these DLC entries also works if you simply put a semi-colon or some other special character in-between the DLC entries. Save the changes to the codex.cfg and close the Notepad.

3.2) If you have not used "My First Pet Stuff DLC", and still have the old RELOADED/machine 4578-cracks.

Click the button Spoiler to unfold (and fold back) the text, as this is not going to be relevant for most users anymore, but I still left the text in for the few people who may not be using "My First Pet Stuff".

Spoiler:
Once you installed all the items according to the TS4 Must-Read, and you made up your mind about what DLC exactly you want to forego, go to the Game\Bin-subfolder of where you installed The Sims 4 to. Go to the RldOrigin.ini file and right-click on it. Go under Properties. In the "General"-tab, uncheck the box "Read-only", and click on apply -> OK. I would also very strongly recommend that you copy this file to a safe location, so in case anything goes wrong you can restore the backup file with ease. 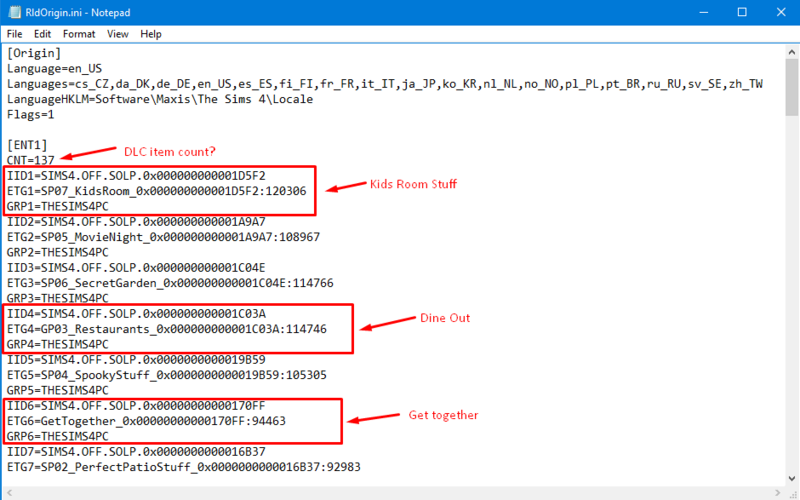 Below the line [ENT1] you can see the line "CNT", the purpose of which we are not entirely sure about at present. Also highlighted in the picture are three references to DLC: Kids Room Stuff, Dine out and Get together. Let's say you want to delete/uninstall these three packs, then you have to delete the three highlighted paragraphs. I am not 100% sure if you really have to remove all 3 lines from a DLC reference, but it is the way I have chose to go about, especially when creating those "Update-Only Ultimate Fixes" on G4TW.

The major DLC references all have three lines, the first starting with IID, the second with ETG and the third with GRP. Next to each of these acronyms you also have a number. If you decide to uninstall a particular DLC, take a good look at the references in the text file, so that you don't accidentally delete anything unwanted.

Then you have to delete the DLC references "surgically". Delete all the 3 lines of a DLC you want to remove (IID + ETG + GRP). *UPDATE*, it's strongly recommended to not edit the actual "CNT" count (many thanks to @Tarac for testing this)! Once you are sure you deleted all the DLC references you wanted, save the changes to the file (press CTRL + S, or when exiting the file, choose to save the changes).

4.) AFTER editing the text files.

After editing the codex.cfg (or RldOrigin.ini) file, I would also suggest to remove the DLC folders from your TS4 installation (see first screenshot), to be 100% sure that the DLC are removed. Here is a listing of which DLC represents which folder.


The potential problems with this method:

Again, this should be normally be done right AFTER you install TS4. If you play with a savefile, especially if it uses DLC content, and then you decide to remove the DLC content, the savefile may become unusable.

The method is more tricky, therefore if you have a tendency to make mistakes along these lines it's best if a friend/relative looks over your shoulder or helps you next right next to you.

"Why doesn't G4TW offer ready-to-use RldOrigin.ini files??" Because it would be too much effort, for very little point. After all, 90% of users want the entire DLC collection of The Sims 4 anyhow. We would have to create all combinations of RldOrigin.ini files, depending on what DLC users have. A modified RldOrigin.ini file is something that needs to be created for your very own individual needs. The G4TW can help you to some extent with that, but in the first place it will be your responsibility to at least give this method a try, yourself. We have one modified RldOrigin.ini file, included in the "TS4 Update-Only Ultimate fix", specifically for the needs of this particular update.

If you have a tendency to be unsure about what DLC you want, then the method isn't suited for you either. Once you use the method, and you decide you want to have some or all of the DLC back, you would have to restore the original RldOrigin.ini file, plus restore all the DLC folders you removed. Then start over (potentially).


This should do for now, good luck!

Note that any and all questions posted under this thread, will be deleted without any explanation or advance warning. We have the Forum sections dedicated to Support purposes, for a reason.

addition:
No need to delete items/folders
As you can see every DLC has 3 items in RldOrigin.ini
IID, ETG and GRP.
Just placing a semicolon in front of these lines for the DLC you wish to remove is sufficient.

This doesn't work when u try to delete the vampire gp ( using the second method ) it will delete parenthood too ! How can i fix this please !

@Lesny daby wrote:This doesn't work when u try to delete the vampire gp ( using the second method ) it will delete parenthood too !

No it doesn't "delete parenthood too" (just tested it myself), if you do the guide properly. Should you need further support please open a new topic in the appropriate section.

@Lesny daby wrote:This doesn't work when u try to delete the vampire gp ( using the second method ) it will delete parenthood too ! How can i fix this please !

Tarac wrote:If you have set CNT to 135, Parenthood (which is 136) won't be loaded.
So don't change the CNT number

Now that is something I didn't expect, thanks for the hint! (guide updated to accommodate this new revelation)

Edit: tested it myself by putting 5 next to CNT. And guess what: it just loaded the "first five" DLC listed in the RldOrigin.ini (Dine Out, Kids Room, Spooky Stuff, Movie Stuff, Romantic Garden), but none of the DLC listed "beyond" that in the file.

I never really took notice of that, mostly because I used the method for the Update-Only Fixes, and in those cases people don't want the DLC anyhow.

Tarac wrote:If you have set CNT to 135, Parenthood (which is 136) won't be loaded.
So don't change the CNT number

Now that is something I didn't expect, thanks for the hint! (guide updated to accommodate this new revelation)

Edit: tested it myself by putting 5 next to CNT. And guess what: it just loaded the "first five" DLC listed in the RldOrigin.ini (Dine Out, Kids Room, Spooky Stuff, Movie Stuff, Romantic Garden), but none of the DLC listed "beyond" that in the file.

I never really took notice of that, mostly because I used the method for the Update-Only Fixes, and in those cases people don't want the DLC anyhow.

If you set CNT to 0 you'll have the base game, incl. Toddlers, only.
When you exclude certain packs after you've played with them in your game you'll see this message: 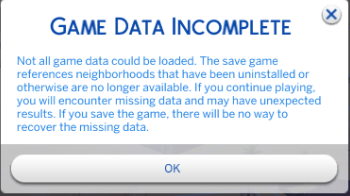 Topic has been updated to incorporate the new codex.cfg file, as of the "My First Pet Stuff" DLC.

As usual, please open a new topic in the appropriate Forum section in case you need more Support.