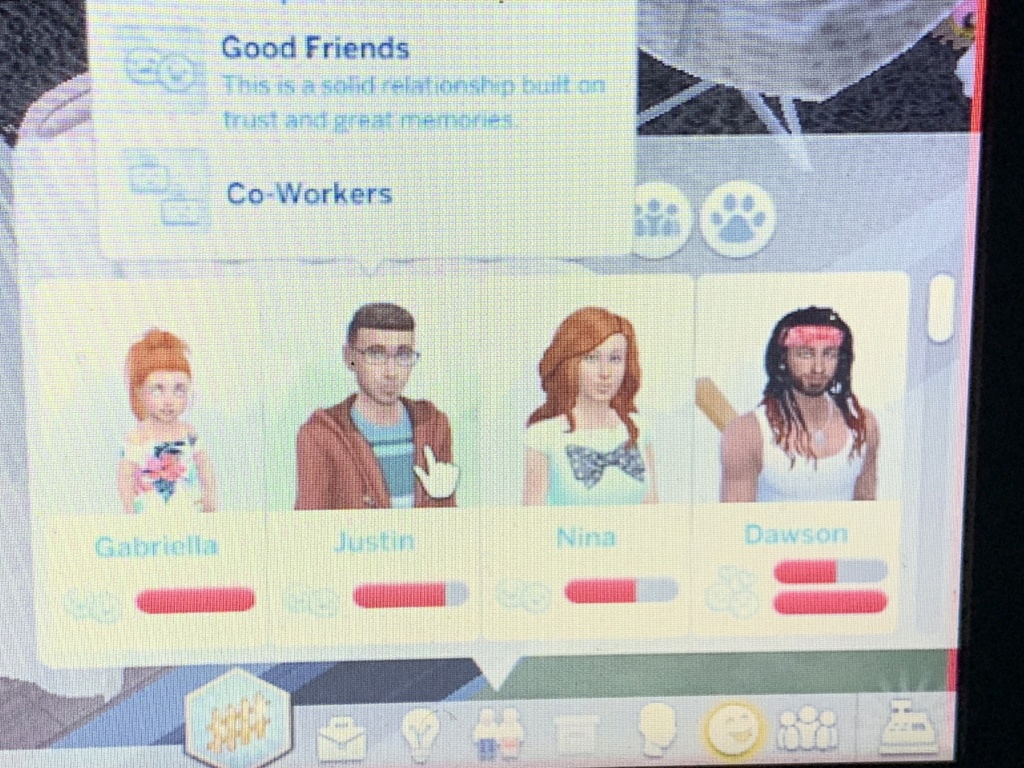 [/url][/url]
After updating my Sims 4 game I have noticed that all my relationships are red. At first I thought all the sims simply hated my sim until i realized that they are friends.

Go to Documents\Electronic Arts and move The Sims 4 folder to desktop. This will start the game fresh, you can move saves back later. If that doesn't solve the problem, run the validator (in quick scan mode) and post the result here.

Sorry for the late reply, but this is what i got from the validator

Didn't check all the files but it looks like you didn't update your game. You just downloaded new "Game" folder.

Yea because i have the  Zorigin sims 4 game so usually i just need the game folder, but i will download the whole update and let you know what happens

The thing is you didn't update it through ZLO. If you want to use just the "Game" folder, first update the game through ZLO. Right now I think you'd need to right click on game artbox and select repair. Then apply cracked "Game" folder. Or just download full update like I said.

I downloaded it from here which was stated as a zlo base game but either way it's not that big of a deal,  I'm currently downloading the full update

Yea, using the full update just messed up my game cause now I cant open my family anymore. I guess i will just stick with the red bars.

Go to Documents\Electronic Arts and move The Sims 4 folder to desktop. This will start the game fresh, you can move saves back later.

Saving the game when you have any glitches can corrupt your save file. You can try restoring previous version: https://help.ea.com/en-us/help/the-sims/the-sims-4/how-to-restore-a-previous-saved-game-in-the-sims-4/

Tips for the future:
- from time to time make a backup of your saves
- if you see any glitches or other problems - don't save the game

Ok i did that but it keeps saying that i have uninstalled data, even with repairing the game. How do i fix that or should i just uninstall and reinstall the game?

What exactly did you do? What do you mean by "repairing the game"? What's the exact error message? Post a screenshot.

After deleting what I told you your installation folder would be perfectly clean. After moving Documents\Electronic Arts\The Sims 4 to desktop your game would start completely fresh. All you had to do was test which save loads. Including previous versions of saves.

Reinstalling rarely fixes anything. You can run validator again (in quick scan mode this time).

I removed the files like you said, I didnt save anything because of the glitch and i didnt want to lose my game file. When i opened the game to create a new fresh Sims 4 file it said stated "Game Data Incomplete Not all game data could be loaded. The save game references neighborhoods that have been uninstalled or otherwise are no longer available. If you continue, you will encounter missing data and may have unexpected results. If you save the game, there will be no way to recover the missing data."


So i thought if i go to the original setup file and repair it that whatever game data is missing would be restored. But that did not work. I am able to play maxis made households but if i try to open my household it states "Cannot start because the required game data is missing or damaged. Please try reinstalling the game."


All my worlds are gone as well except for the original four. 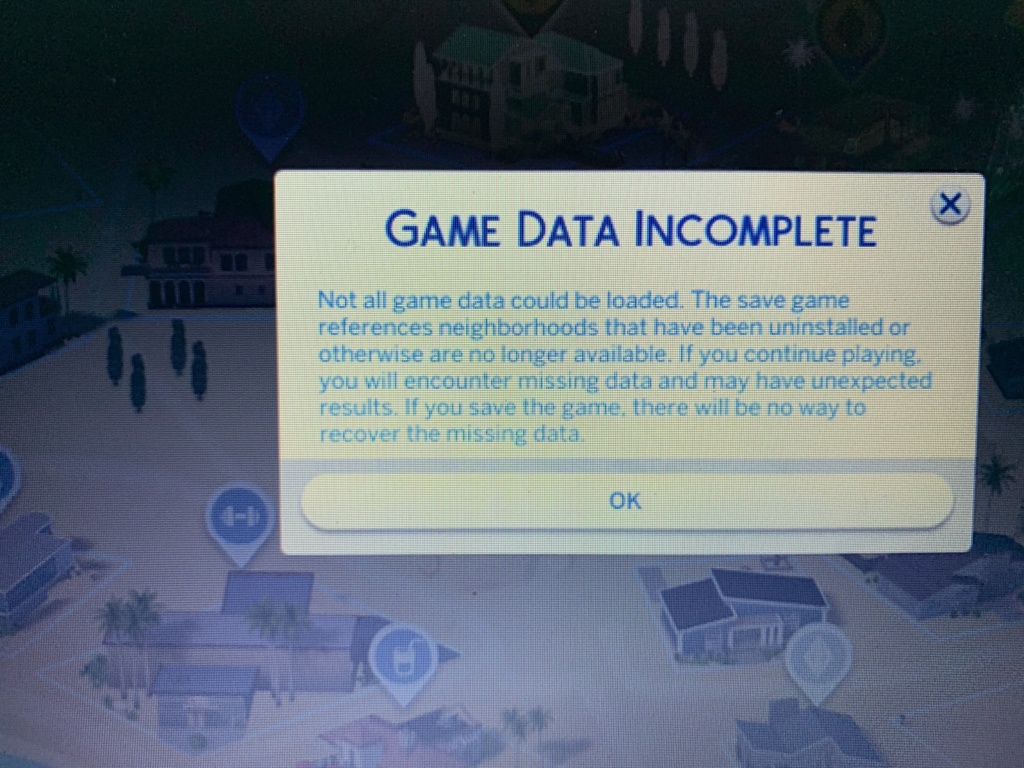 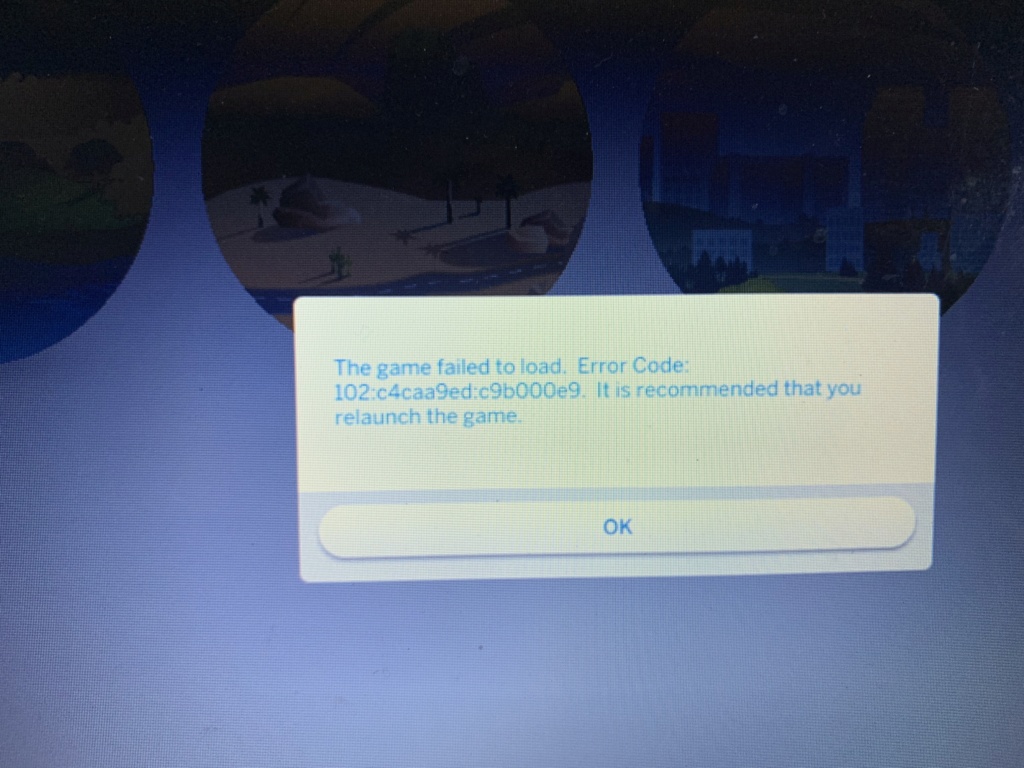 So you didn't move Documents\Electronic Arts\The Sims 4 to desktop like I told you to do...

By installing base game again you messed up a lot. Now you have to re-install all DLCs in correct order.

Try uploading your saves folder somewhere and send me a link. I'll see if I can start it.

I did, the first one one happened when i removed my folder and  the second one shows what happen: when i put the folder back after i launched the base game only. I already removed my old files and re installed all dcls in order and it is still doing that regardless if my folder is in there or not.

Don't do anything other than what I say. Run validator, normal mode, post result here.

Mixie wrote:(...) after i launched the base game only.

Emphasis in bold red. We are still talking about the ZLOrigin version of The Sims 4, right...?

Because the ZLOrigin version of The Sims 4 does not "launch the base game only". Unless you somehow tamper with the files, or they changed something in the meantime, the ZLOrigin launches with all DLCs.

Mixie wrote:I downloaded it from here which was stated as a zlo base game (...)

That's not what it says.

What we provide is a "Game"-folder that allows the bypassing of ZClient/ZLOrigin (because people keep lamenting "what if the ZLOrigin servers go down??"). Yes, you actually need to download the update from ZLOrigin first, before you can use that "Game"-folder. Maybe we could indeed make that point clearer in future announcements.

Mixie wrote:Yea, using the full update just messed up my game cause now I cant open my family anymore. I guess i will just stick with the red bars.

The G4TW full update includes already the complete Game-folder, so if everything else was fine, you'd be able to run this thing by now.

If I'm allowed to give some advice of a different kind here: let the matter rest, and do something else for a day or two. Then get back to repairing your game. But that's up to you in the end. And if I'm allowed to be even more frank, you must have (accidentally) done something very serious, in order to damage the ZLOrigin installation that much. Best approach that problem, when you are again 're-freshed'.
_________________

@The_gh0stm4n the only thing i did was update my game. I noticed a new update and installed the Game folder, which i have been doing because shortly after the Sim 4 was released, there was a forum that stated for Zlo based games to only install the Game folder because upon installing the full update other players were having issues with starting or playing the game. I never got my game from the Zlo website, i downloaded from here, but it is based on Zlo because it is stated on my game, i can provide a screenshot if needed.

Yes i am referring to the Zlo based game, when i said base game i didn't mean it as just the regular Sims 4, i meant without my personalized Sims 4 folder (Mods, Tray and Saves). All my dcls show up when I start the game but i can not play the game with any of the dcls because of missing data.

When i installed the new Game folder that is when i realized the relationship glitch. After installing the full update like i was instructed to, that is when i started having the extra issues. I only repaired the game because that was one of the options I was told to do once I stated i have a Zlo based game, but because i did not download from the website the only way to repair my game is to start the initial setup file and repair it from there which i had done but it made no changes to my game.

Right now I am at the point to whether my Sims 4 is in my folders or not I am receiving the missing data error message regardless, i only receive the other error message if i try to play one of my households. I did not save my game when i received any of these messages because i did not want to mess up my files. I have not done anything extra. I am not sure if I am not being clear within my messages but I have done everything I have been instructed to do. I hope this clears up what is going on.

@anadius I will run the validator again, but i am not sure if my game is going to come back. I might just need to start over and then install the update and see if that works.

Also i am not sure how to upload my saves folder, i mean to tell you that earlier

I'll tell you what to do after seeing new report.

Yes i did, that's what i've always done. I never had an issue until now. Here is the new validator file and this is the link to my saves folder: https://www.mediafire.com/file/tkcyecresaswy68/Sims_Saves.zip/file

First validator result proves you wrong, your game was not updated.

Uh, so now you have just the base game.

That's why you're getting that error message. Install all DLCs.

I moved my "Documents\Electronic Arts\The Sims 4" folder to desktop, started the game, closed it, added your saves and all works fine (except for missing CC so most sims are bald and without clothes).

I just stated i have all the dcls, and my game is on version 1.49 otherwise my game wouldnt open. ive erased my whole folder and re installed the full update with the same results so i dont see how im suppose to install something that is stated is already there and updated. Im just going to leave it alone because repeating the same steps is not working. Thanks for your help though.