This is what I been reading on different sims forum coming in Oct or Nov. I really want the University pack to heck with the supernal pack.

Realm of Magic is a thing and they already said it's coming this fall. As for next expansion there was job offer confirming they are working on it but there's no release date nor theme. Just speculations and rumors, as you said. But it would be nice to have University by the end of 2019.

If its a University pack, I hope it has as much streaking and keg drinking as TS3 University Life.

@bob smith wrote:If its a University pack, I hope it has as much streaking and keg drinking as TS3 University Life. 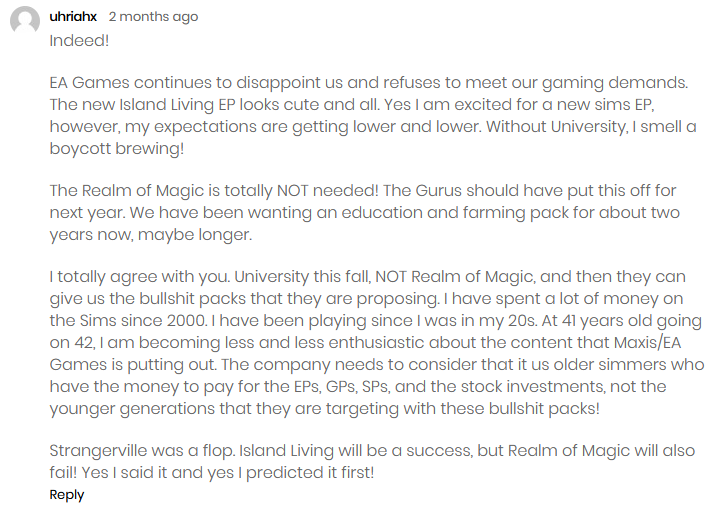 We used to get a lot of these types of comments over here as well, though it seems most of these people moved on. Either way, if someone's approaching their early-40s and they're still grumbling about a franchise that is about 20 years old (and further innovation seems unlikely), they really should move on as well.
_________________

Any news regarding this? I am very hyped

@theoni2019 wrote:it is out in origin but no other news on the cite

I hinted at the basic issue of 'why it takes longer on G4TW', here:
https://www.games4theworld.club/t35407-quick-forum-update-spellcasters-western-propaganda-antivirus-software-deep-packet-inspection-more#

A new The Sims 4 Gamepack is set to be released for the PC/Mac platforms on September 10th 2019, and for consoles on September 15th. It is said to focus on everything "magic", including cauldrons, broomsticks, new supernatural life states, and little familiars that can accompany a sim.

As usual, there will also be a repack here as soon as possible. Please note that there will be some 'delay' - as always - before a G4TW release. I also have other responsibilities to deal with, plus we playtest the functionality of new updates a bit, and we have to organize direct downloads and seedboxes too. No specific ETA though - as always. (...)

We've now made it into a habit of posting at least one direct download option alongside the torrent, because almost everybody here lives in a "free liberal and Western democracy" where they send out warning letters for torrenting stuff through the home internet.

We're also organizing seedboxes, so that when the torrent does get released there is a somewhat decent initial speed.

And yes, my excuse is also that I am slightly older than the average G4TW user, just slightly, so I'm not really able to spend too much time behind a computer screen. A concept that's going to sound alien-like to most of the (Edit: younger) people here.

Maybe it'll help you filter out some bad mods.

Another hint: don't hold your breath, it's not coming today on G4TW.

Hello and thank you for your amazing work on sims 4... I saw that we will have a delay about the new dlc... But I want to ask is there a possibility for having the new dlc later today?

The reason I temporarily put the Forum off-air was a pre-caution due to a possible 'situation' (takedown, or similar). But luckily, it turned out to be a false alarm.

The reason I temporarily put the Forum off-air was a pre-caution due to a possible 'situation' (takedown, or similar). But luckily, it turned out to be a false alarm.

It was what I thought, but was worried.

hey! sorry, I don't know where else to ask, but will you upload the september 17th patch for RoM? saw simguruGraham's tweet yesterday and was wondering

What do you think of Realm of Magic so far

I want to know why they  leave the worlds so unfinshed. I mean come on now their is so much they could have added to this world, all they had to was watch Supernatural show or charm. It is like they want us to build our own worlds. I am getting a kick out of using spells and stuff. I thought we would have some magical looking wardrobes.


[not]Message merged to existing thread about "Realm of Magic".