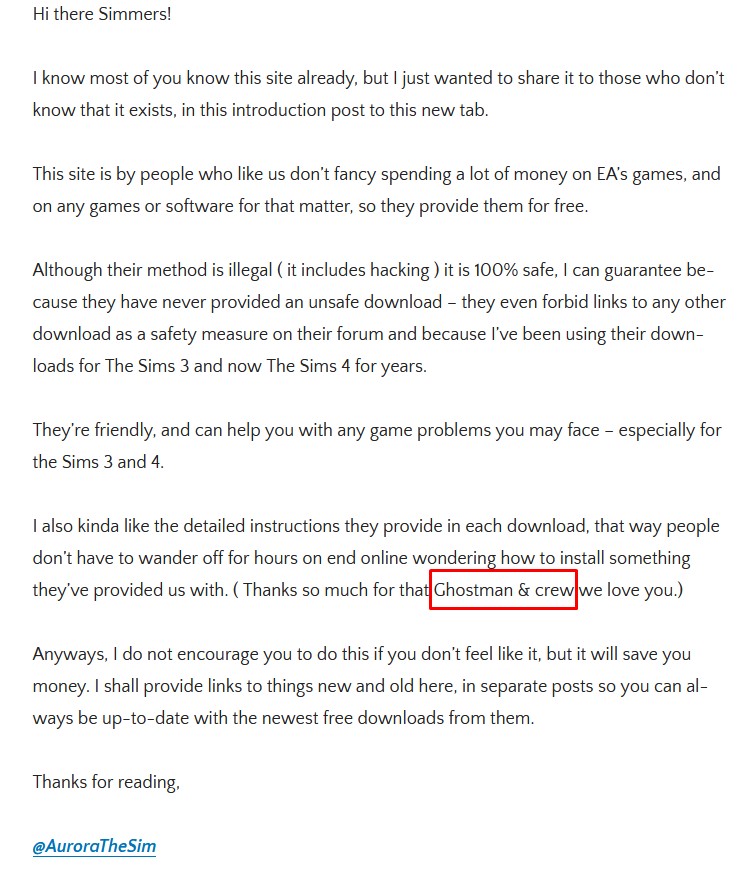 By the way, and to clear up: we do not (and never did) "hack" anything. The only activity that comes closest to that word would be the creation of these "TS3 Ultimate Fixes" many years ago, which are really No-CD files only. Those files do not influence anything else at all, and are absolutely harmless.

Hypothetical commenter wrote:Umm Gh0stm4n, no, you're not on TV actually...

That was a tongue-in-cheek reference, you dummy. Now shut up.

I'm afraid this whole thing isn't working the way we expected it to be, so I will now put the Forum in "Read-Only Mode", that means all messaging functions are disabled.

I will add new TS4 updates and any other software/game releases to the respective download lists.

Hypothetical commenter wrote:But why didn't you just give it some more time Gh0stm4n????

Mostly because you can determine very quickly if somebody is capable of "doing this". And the way I see it, nobody is capable. So me and ~Ann~ will have to have some further discussions anyway, on how to proceed.

Please don't be upset, that goes for anybody. It's no shame to "not be able to do this". But the problem remains, and as I hinted in the opening announcement, if somebody really wanted to step up, they would have to perform straight out of the box. That is not the case, plus I'm not willing to continue with this "limbo-phase".

I also noticed people have stopped commenting on even semi-off topic threads like in The Sims Emporium. A good sign that most of you are either angry, disappointed, confused, sad, or any combination thereof. But as stated, my intention was to retire anyways.

As "Gatekeeper" or "Acting Admin", it's also an important quality that you are able to overcome fears, and take charge of situations. Generally it involves many qualities that cannot be easily taught. And as lovely as the vast majority of the users here have been over the years, and after some reconsideration, I don't think we can find a suitable new Gatekeeper among this existing userbase. Like I've said many times, I would prefer stating blunt and unpleasant things, rather than sugarcoat anything.

Even if I really wanted to continue, I also have to face the fact that I am no longer able to bring up the physical and mental stamina like I did about 7 years ago, when I started as "Assistant Moderator" here. Or, "The Sims Helper", as it was called back in the days. I really would not be able to help people like I used to in the past. You really have to know when to stop, and I feel that time has come for me.

As for the rest, stay tuned for further announcements by ~Ann~.

Why am I getting riff-raff e-mail messages from the Forum system, that some random noobs committed account suicide?

I don't care about "being informed that [insert username here]  committed account suicide  deleted their account". No worries though, I just edited my profile inbox to an address that I don't actively use anymore.

I was almost going to mock again the French overlords from Forumotion (and by extension the former G4TW Head Admin and his entourage, who chose this atrocious garbage of a Forum platform in the first place; unfortunately - as is common practice with these types of services - they don't even allow us to export the database of this Forum to a self-hosted solution, but more on that later maybe). But then I figured out the notification must be some odd legal requirement about this "European General Data Protection Regulation". Oh well.

No, conveying the above was not the (only) reason I came online again. One of the Forum VIPs asked if there will be further G4TW repacks of these TS4 DLC - I believe I said this already in the first announcement. But yes! Those will still be posted on the Forum here. Just not with the usual support aspect. It's not like we have much of a choice anyway when it comes to capable people in that regard.

In other words: yes, the Forum itself will remain in Read-Only Mode, for the foreseeable future. But TS4 repacks/torrents will be posted. I also saw you can use again the .torrent links on here, even if you use an American IP-address. Not sure when that was fixed, but alright.

The bad (?) news is that all direct downloads are discontinued, with my official departure from the G4TW Forums. ~Ann~ does not want to 'inherit' the risk of these direct downloads, and I myself am not really inclined anymore to monitor & maintain them either. Take it as it is, and just grab your direct downloads elsewhere if you cannot/don't want to buy a VPN subscription. I won't give clout to anybody in particular, though I'm sure you'll have no difficulties finding alternative sources. Speaking of clout, we are also withdrawing our formal endorsement of all guest contributors, including Sim Architect. No assumptions please - this is part of the new direction G4TW will be taking in the future. There is no beef with anybody. More on that, again, when the time comes.

So ... about VPN services. If you decide to use G4TW's repacks from now on, there will only be .torrent files & magnet links. That means you should use a paid VPN service for torrenting, especially if you live in the realms of "wonderful personages" such as Trump/Biden, Trudeau, Merkel, Macron, Johnson, and probably some other idiots as well. Please do some further research if needed. Otherwise you may risk your internet being terminated, unless you torrent through a good & paid VPN service.

Now some of you might say that "VPNs cannot be trusted for various reasons". That's OK. But the problem of torrent swarms being monitored by unfriendly people remains. I do concede though, that you shouldn't purchase a(ny) VPN subscription, just for torrenting these TS4 repacks. It's simply not worth the money in my opinion.

If - however - you intend to torrent a lot of stuff, and/or you also travel a lot and want to enjoy your video streaming services from abroad (e.g. Netflix), then by all means sign up for a paid VPN service. These case-scenarios that I mentioned are pretty much the only situations in which a good VPN is helpful. For everything else you can also use the TOR browser or some other free VPN.

Yes, computer firms may also use VPNs, but I'm not addressing them here with this announcement.

If you look at the Forum FAQ (II. "Can you recommend VPN services which support torrenting") we have some suggestions for services. These are really only suggestions. Ultimately you'll have to be comfortable yourselves with whatever you end up choosing.

On occasion you will hear about scary tales that some person using a VPN has been busted by [insert one of the countless American intel/law enforcement agencies here], usually in the context of child pornography or some other cybercrime. Then these scary tales make a big deal out of "the VPN does log user data", which in turn is used - even by some well-meaning contemporaries in the piracy scene - to argue against VPNs.

Yes, if you intend to use a VPN for cybercrime, then you will very likely get thrown under the bus. Other than that, and in my opinion, it's very unlikely that a random person could get busted for torrenting stuff. But hey, if you absolutely want to believe "they are out to get you", then chances are you are probably in need of more professional help. A more realistic longterm scenario is that self-titled liberal democracies will at least partially implement what China is doing in that regard: simply hard-blocking IP-addresses of VPNs and TOR exit nodes. And even that scenario is a little bit far-fetched.

To sum up: yes, I believe paid VPN services can be helpful depending on an individual's interests & lifestyle, maybe for certain job/school reasons as well. Just make sure to compare features and prices carefully, so that you don't end up spending too much on items that you maybe don't need.